Visit the Global Website or select your region below.

The direction of an electric charge that is flowing in a circuit is constantly being reversed back and forth.

The standard unit of measure for electrical current, defined as the amount of electrical flow equal to one coulomb per second.

The product of the applied voltage and current in an AC circuit.

A power failure in which line voltage drops to zero.

A drop in voltage in electrical power supply.

Cables that are made of an inner conductor surrounded by an insulator and a shield that are generally used for TV antennas, satellite dishes, cable modems and certain computer networking applications.

The flow of electric charge, measured in amps.

Dynamic Host Configuration Protocol (DHCP), automatically assigns an IP address to a device on a network.

The unidirectional flow of a electric charge.

This high-end UPS system converts incoming utility AC power into DC power and then back into AC power, charging connected devices with the UPS battery. The isolated process ensures clean and stable output voltage and zero transfer time. This UPS system is ideal for equipment sensitive to power fluctuations such as corporate data centers, servers, and network and storage devices.

The number of cycles in a given time period, which is measured in Hertz.

An electrical system connection that serves as a conduit between the circuit and earth.

The midpoint in the maximum load capacity for a UPS.

High amperage devices that require installation by a qualified electrician to be directly wired-in, instead of simply being plugged in to an outlet.

The unit for frequency, defined as the number of cycles per second.

A term used to describe the functions of replacing a UPS battery without shutting down the unit.

A measure of electrical energy — one joule is defined as the energy needed to pass one ampere of current through one ohm of resistance.

Functions the same as a standby UPS, with the additional feature of some voltage regulation built in. It switches to battery power when voltage drops too low, just as a standby UPS does, however if the voltage only drops slightly, a line-interactive UPS corrects this without using battery power. The functionality of these mid- to high-grade units falls between standby and online UPS units.

The amount of power consumed by an electrical device on a circuit. Load capacity is a critical factor in selecting a UPS or surge protector.

Metal Oxide Varistor is an electronic component that is used to protect circuits against excessive, short-lived, voltages.

The standard voltage for a circuit or system. Common nominal voltages in the U.S. include 120VAC, 208VAC and 240VAC; while nominal voltage in the EU is 230VAC.

This occurs when incoming voltage is higher than normal but not high enough to be classified as a surge.

The ratio of real power (watts) to apparent power (VA), expressed as a number between 0 and 1. Watts divided by VA = Power Factor

Controls the incoming power to a power supply in order to bring the power factor as close to unity power as possible.

The amount of power being drawn by a system, measured in watts. Real power is a function of VA (apparent power) and the power factor.

The abbreviation of registered jack (RJ) – RJ11 is for standard phone lines, RJ14 is for multiple phone lines and RJ45 is for Ethernet.

The maximum period of time battery power is output from a UPS to its connected devices during a power interruption. Runtime is dependent upon the total load of all connected equipment.

Refers to the distribution of alternating current electric power using a system in which all the voltages of the supply vary in unison.

Simple Network Management Protocol is a commonly used protocol for devices to communicate over a network.

A spike is a sudden, brief power surge, usually lasting less than 1ms.

A UPS that passes utility power straight through to the output when conditions are stable, but switches to battery power when utility voltage drops below an acceptable level.

Periods when line voltage increases dramatically, typically lasting longer than 1ms, but less than a few seconds, though they can last longer.

A calculated measure of the reduction in sine wave clarity caused by stray wave frequencies.

The process of dissipating heat from an electrical system via air or liquid cooling; also a term for the amount of heat a device can emit.

The time it takes UPS to switch from AC power to battery power.

A device that converts AC line voltage to a higher or lower value.

The standard unit of measure for rack-mounted equipment. A device measuring 1U is 1.75 inches high, 2U is 3.50 inches, etc.

Related to both brownout and voltage sag, undervoltage falls between these two, occurring when voltage is lower than normal for an extended period of time without recovering, but not to low that the electronic device will not function.

Universal Serial Bus devices are used to connect various components to a computer. An HID (Human Interface Device) compliant USB follows a specific protocol for communication that allows it to be used with virtually any system.

The difference in electric potential between two points when one amp of current dissipates one watt of power.

A device or component that normalizes voltage to a certain standard when it is fluctuating.

A unit of measure for true power consumption.

Is a representation (or form) of how alternating current (AC) varies with time. Common waveform representations include sine wave, square wave and trapezoidal wave. An instrument called an oscilloscope can be used to visually represent a wave as a repeating image on a screen.

Refers to an abnormal flow of current that is due to an improperly grounded electrical outlet. 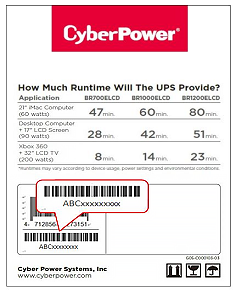 Restart Stay on this page

Your message has been sent successfully.